Filinvest Land’s newest project, Ashton Fields, is located along the national road in Brgy. Tulo, Calamba, Laguna. Hence, it is easy to get to and also provides the residents convenience in terms going to and from work (or school, and any other destinations). The city of Calamba also has its historical significance since this is known as the hometown of the Philippine national hero, Jose Rizal. For this reason, Calamba is often frequented by tourists who wanted to get to know the city where the famous national hero grew up from.

Ashton Fields is built on a land with the Mt. Makiling Nature Reserve as its backdrop. Hence, homeowners can wake up to the view of Mt. Makiling and to the fresh air of Calamba. These ae the things that money cannot buy; hence, that alone is enough to give you great value and reason to invest in your own home in Ashton Fields.

Despite being about an hour and a half away from Metro Manila, you won’t feel too far away from a metropolis either. Calamba has seen so much economic growth over the past few years. It is no longer considered as a rural area or agricultural zone, just like it used to, because there are several industrial and commercial establishments available. For instance, there has been a proliferation of economic parks and industrial zones in Calamba in the past decade or so. The arrival of these industrial parks mean employment opportunities for the people of Calamba, such that you won’t have to go to Metro Manila (and live far away from your family) in order to seek out employment opportunities. Some of the businesses that operate within the area include Samsung Calamba, Yakult Philippines, Nestle Philippines, XD Factory Center, Carmelray Industrial Park, and Calamba Premier Industrial Park. The best part about these industrial and economic parks is that while they have made the industrial landscape of Calamba booming, they have done so using sustainable development methods to preserve the environment.

If you need to do your grocery shopping, Calamba is also filled with various malls and shopping centers. The ones that you can choose from include SM Calamba, Walter Mart Makiling, Centro Mall Cabuyao, and Checkpoint Mall. Meanwhile, this part of Calamba is also easily accessible by public transport. In fact, the Turbina Terminal is within a few minutes away from the site development area.

For those seeking leisure and recreational opportunities, you have more options in Calamba aside from the amenities offered in Ashton Fields. Thus, you can have a quick getaway with your family and save yourself from the stress of traveling far in order to get the relaxation you deserve. In fact, the city of Calamba has earned the nickname “Resort Capital of the Philippines” due to the high concentration of hot springs in the area. There are several resorts and tourist attractions you can choose from such as Hot Spring Resort Pansol, Doña Jovita Garden Resort, People’s Park in the Sky, Makiling Highlands, and the Jose Rizal Shrine. 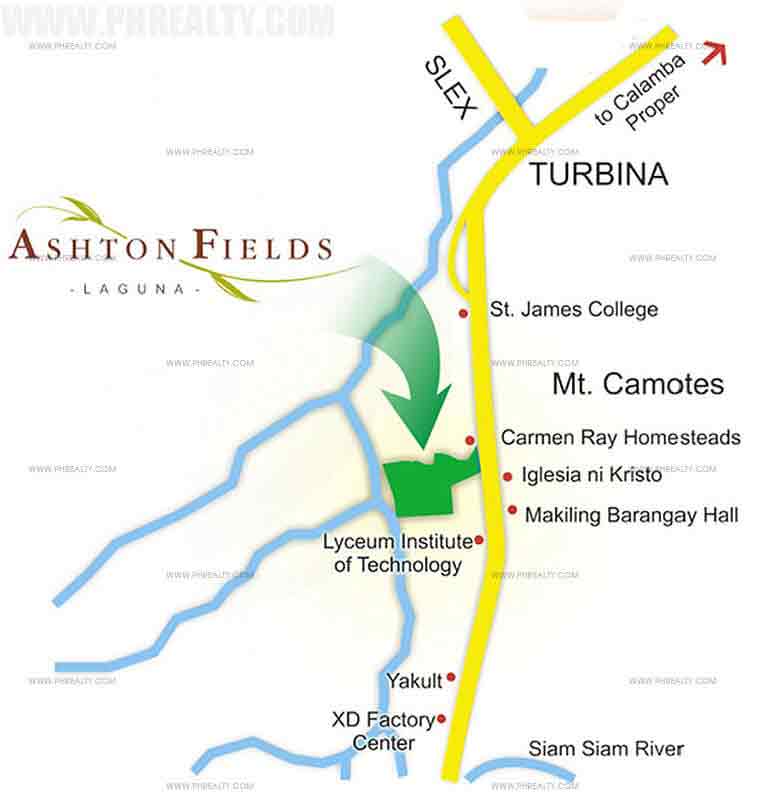